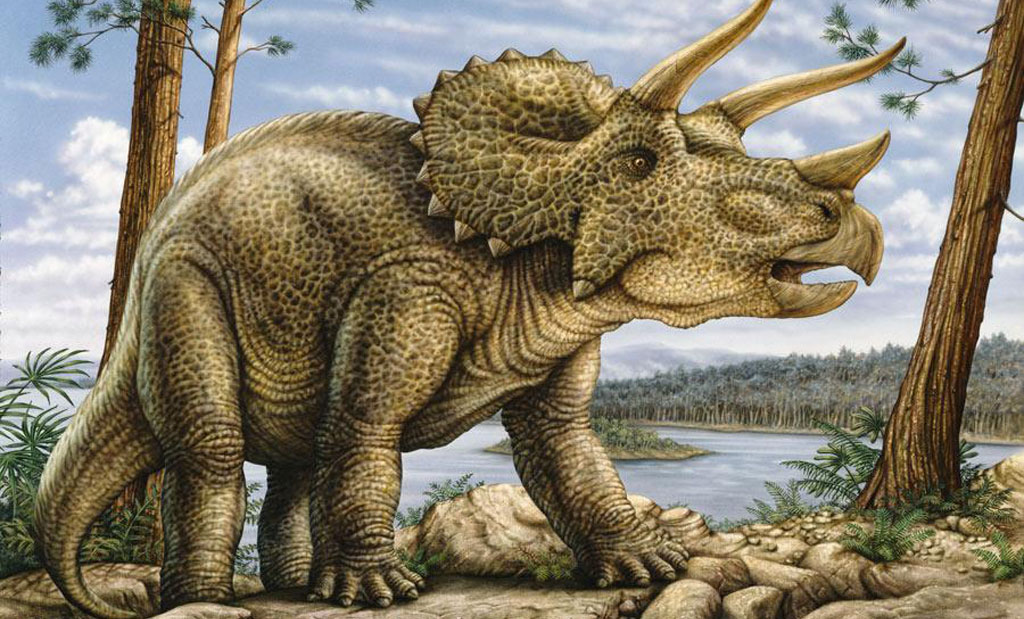 There are probably two or three dinosaurs that you immediately think of upon hearing the word “Dinosaur”.  One, for sure, is the T-Rex, another might be the Brontosaurus (even though that’s an Apatosaurus, dawg.  We’ll get to that another time, don’t worry).  But perhaps the most instantly memorable dino is the Triceratops.  Known for it’s three horns and hard bony shell atop it’s head (it’s name literally translates to “three horned face”), Triceratops makes a great case for being so damn popular.

First discovered near Denver, Colorado in 1887 (although at that time, it was just a few spikes that the paleontologists at the time had no idea belonged to this new classification of dinosaur), the Triceratops was indigenous to what is now North America.  Fossils have been found in Colorado, the Dakotas, Montana and parts of Canada.  There are two verified species of Triceratops that have been discovered (T. horridus and T. prorsus), although dozens of other specimens have been unearthed over the last 130 years.  Triceratops is unique in that its one of the few dinosaurs that has verified fossils of almost every life stage from birth to adulthood.

While on the topic of stages of the Triceratops’ life, it was recently reported though fossil evidence that Triceratops could be a younger-still version of a similar ceratopsid (horned dinosaur) Torosaurus.  I don’t buy it, seeing as the skulls don’t really seem to indicate that the two were that similar, but paleontologists are continuing to study this finding, and hopefully soon we will have a strong enough hypothesis one way or the other.

In pop culture, the Triceratops shows up EVERYWHERE.  One of the earliest dinosaur scenes in the first Jurassic Park featured a sick Triceratops.  Animated films like We’re Back and The Land Before Time series both featured Triceratops’ in a major role.  Earl’s boss from the 90’s sitcom Dinosaurs, B.P. Richfield, was a Triceratops.  Basically, if you are making a show or a movie with dinosaurs, it’s gonna have a Triceratops.

Perhaps the most well known facet of the Triceratops is it’s assumed rivalry with the major predator of the Late Cretaceous period, the Tyrannosaurus Rex.  From movies, television or even on display at the Natural History Museum in Los Angeles, we’ve had this vision of T-Rex battling Triceratops ingrained in us for decades.  It makes sense, doesn’t it?  They lived in the same part of the world, at the same time in history.  The largest predatory dinosaur squaring off with one of the largest and more fearsome herbivores?  Awesome. 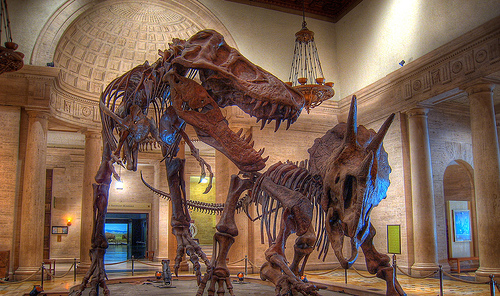 So, if everything we know now is to be believed, the Triceratops was one dope ass dinosaur who had a history series of classic battles with the biggest land predator of all time.  They also have become synonymous with the word “dinosaur” and have been a fixture of pop culture for 120 years. Hell, it could even turn out that in the next 5-10 years, we could learn that this wasn’t even the Triceratops’ final form, and she gets even bigger and more impressive an animal as the Torosaurus.

What a cool freaking dinosaur.