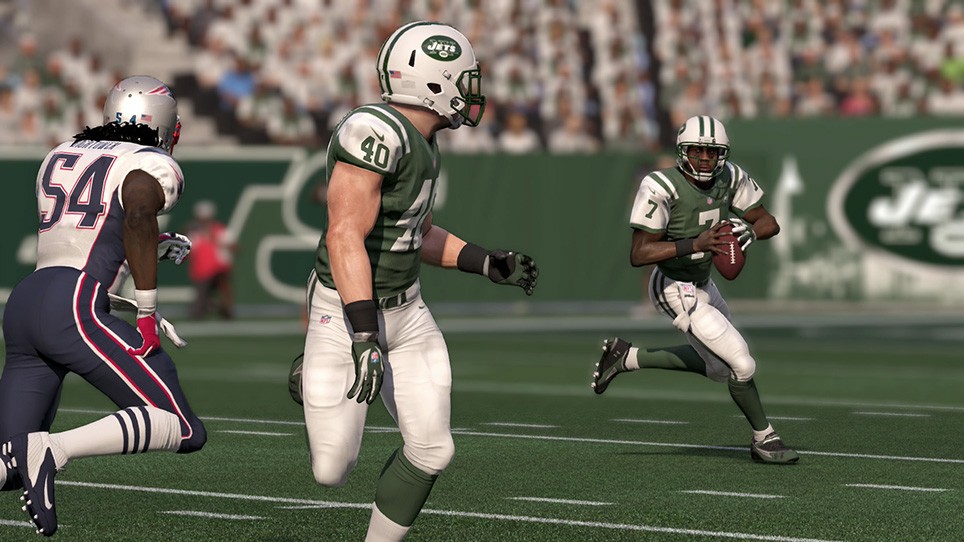 Maddenoliday has come and gone and we are now knee deep into Madden Season.  Players on Xbox One have had two weeks to tinker with each setting and find every glitch.  Unfortunately, it was a bit of a mixed bag…

Madden NFL 15 was a huge step forward for the franchise last year when it came to how football was replicated digitally.  The only real complaint from most people was the same complaint many people have had for years: There is not enough (if any) interaction between defensive backs and receivers.  Madden NFL 16 has remedied that glaring issue once and for all.  On EVERY pass attempt on offense, you can choose (while the ball is in the air, so be quick) between going for a possession catch, a spectacular catch (to give that extra effort to get to a ball way over the receivers head, for example) or a YAC catch (where if you are wide open, it positions your receiver in a way that he will hit his stride sooner after catching the ball).  Throw in a few more throwing options from the QB and now you don’t have to cross your fingers and just hope for the best when throwing the football (as was the case in years past).

Defense wasn’t ignored either.  When playing defense, you can hit a button to quickly switch to the defender closest to the ball and choose if you want to play the receiver (better for tackling or making sure he can’t make that spectacular catch) or play the ball (better for intercepting the pass).  It leads to a decent game of rock-paper-scissors on any 50/50 ball (where both the receiver and defender have an equal shot at the ball).

In addition to the big changes in receiver/defender dynamics, the gameplay just feels a lot crisper and more reactive all around.  New gang tackle mechanics lead to more realistic animations in tackles.  AI (on both sides of the ball) seem to be both smarter and more realistic to the NFL.  All around, this is the best playing Madden ever (outside of a glitch where occasionally your defensive linemen will get called for encroachment even while everyone is still lining up, which is probably going to be patched out in a few weeks).

Perhaps the gold standard of sports franchise modes, Madden has always led the way in just about advancement in the mode.  From the super important (like scouting upcoming draft picks) to the super mundane (like setting prices for Pizza at your concession stands), Madden has always taken a step forward with Franchise Mode.  Unfortunately, a bug-riddled mode has made Franchise almost unplayable this year.

First, the things I actually enjoy: The new dynamic goals system is a far more efficient and fun way to upgrade your players.  Players have goals for their career, that season, that week and even down to each drive.  Obviously this will lead to a little stat padding in franchise so you can get those extra XP points for Geno Smith, but you do that anyway, and the on-screen popups of XP gained here are as addicting as they are in Diablo or Borderlands.

The new scouting mechanic for the incoming draft classes is a solid improvement over years past.  You can’t linger on one player too long and you can’t hoard scouting points until the end of the season, making each week of the regular season a little more precious.

Unfortunately, this is where things begin to fall apart.  Any incoming rookies can’t progress past an 85 overall (except with Confidence rating boosts, which the Confidence system is still this nightmare that should be excluded from the game next year), and many draft picks simply aren’t what you bargained for.   I understand that the occasional college stud comes into the league and is a total bust, but when it’s a vast majority of the players you draft, that is a problem.

Another problem comes with trying to re-sign any players with expiring contracts.  Many simply won’t re-sign.  Even if you offer DOUBLE the amount of money they want, they still won’t.  The game isn’t smart enough to give a plausible reason, just that they “rejected” my contract offer and I should try again.  If the game would just put in a dialogue with my player where he simply states “Yeah, sorry coach, I don’t want to play in New York anymore”, I’d understand.  But going by past-Madden logic, where any player can be had for the right amount of money, the fact that I can’t re-sign an aging wide receiver for TRIPLE what he wants is ludicrous.

A patch is coming for Franchise mode in a few weeks, but as of this writing, it’s still a big mess.

Normally, this spot would just say “hey, did you like Madden Ultimate Team last year?  If yes, you will probably still like it.  If no, you will probably still hate it”   But this year, Madden Ultimate Team takes some steps in the right direction.  Playing single player MUT is a much more rewarding experience than the boring grind it has been in years past.  You can still play against each NFL team on each difficulty (like you could last year.  This year it’s called “The Gauntlet”), but they have also added nice quick tastes of revisionist history from last years NFL season.  Instead of taking 20 minutes a game, you are rewarded with coins and packs within just a few minutes.

Also adding to the fun this year is Draft Champions.  I went over most of what I liked about this mode a week ago, but what really adds to Ultimate Team is it’s benefits for the offline MUT player.  While your ultimate team is garbage (which it will be for a bit if you don’t spend any real money on the mode), you can draft a team of 15 superstars and take it online (or offline, which is slightly less fun.  It goes from Rookie to Pro all the way to All-Madden) against similarly skilled (but differently built) teams.  Although most of the players stay the same (you are gonna see a lot of Cam Newton and Giovanni Bernard), it mixes up each draft enough that you will never have the same team twice.   Drafting itself is fun, and the percentage of griefing or cheesing players is less than those in regular online modes (though many do go for it on EVERY 4th down… most don’t have a cheap money play that works every time).

If you tried Ultimate Team once or twice a few years ago and it wasn’t your jam, I might recommend taking another look at this years version.  It’s got a lot of the same money-grabbing tendencies, but you will be able to earn coins and packs quickly enough through offline games (and Draft Champions) that it isn’t quite the grind for free players that it once was.

Madden NFL 16 is a couple patches away from being the complete package.  Unfortunately, if those patches don’t come in a timely manner, this holiday season is simply too packed with games that I’ll have much time for it when they get around to it.  In time, all my problems will get patched out and what’s left is the best playing Madden ever.  B+