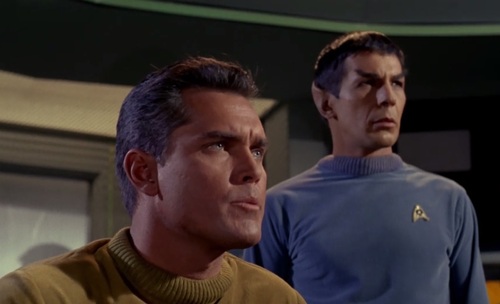 (Editor’s Note: This was previously posted on my tumblr page and is being put here because I’m going to resurrect the series in the coming weeks and would like to have all of the diaries in one place.  There are a few more of these that will pop up randomly before then (not in place of brand new writing).   This was originally posted on January 17th, 2015.)

So this is a dumb little adventure I opted to start today.  Basically, I’ll be going through the history of Star Trek on Netflix and writing a little blurb about each one.  I’ll go in mostly chronological order (Original Series – TOS Movies – The Next Generation – TNG Movies – Deep Space Nice – Voyager (concurrent with DS9) – Enterprise – JJ Abrams reboot).  I’ll offer a few choice thoughts I have throughout each episode/movie, and at the end, award it a letter grade (A-F, like in school) and give out MVP and LVP awards (thanks for the idea, Chris Mullet of Podswoggle).  So, lets get started where it all began: a crazy pilot with no Shatner.

– Show starts in the bridge where Spock is the only character I think makes it past this pilot.

– Crazy old Doctor is making martini’s.  No wonder he loses his doctors license and Bones has to take over.

– Now Captain Pike is complaining about being Captain.  I’m less and less surprised that all these people lose their jobs.

– “Number One” (played by Trek Creator Gene Roddenberry’s eventual wife, Majel Barrett) is the best actor on the show right now, so naturally, she is staying behind with the ship while the actual story takes place.

– Oh right… now I remember the dumb plot of this dumb pilot… The weird Big-headed guys use a distress signal to capture Pike.  Then 45 minutes of over-acting ensues.

– If these big-headed guys evolved to the point where they could talk to each other with their minds… why still have mouths?  If the internet existed in 1965, they would have torn this apart.

– Spock taking command of the Enterprise for the first time ever.  Earlier than I thought.

– No one in the transporter room seems to know how or why the Transporter works.

Most Valuable Player: Captain Pike (Jeffery Hunter) – 1st MVP – He carried the show and was a decent first captain, would have appreciated better treatment of the Talosians.

Least Valuable Player: Vina (Susan Oliver) – 1st LVP – She was pretty damn cringe-worthy whenever forced to deliver a dramatic line.  Most of her lines were pointless, as it was just her saying the same crap over and over again while Pike ignored her and continued to monologue.

Final Grade: So basically, the Talosians just wanted their species to thrive and to give humans everything they could ever want, and Pike was just a bully about it.  Certainly laid the groundwork for the series to come, but really rough in a lot of key areas.  C-

Next: “The Man Trap” – The first REAL episode of TOS with Kirk, Bones and all our favorites.  Should be a treat.